With power market conditions fluctuating in response to changing consumption demands as economies across Europe look to kickstart the green recovery after the height of the COVID-19 pandemic, Eylert Ellefsen, Senior Analyst and Hydrology Expert at Energy Quantified by Montel presents a comparison of the German power balance between Q2-2019 and Q2-2021.

Across Europe, power consumption levels have now, recovered (more or less) to their 2019 levels. With the removal of social restrictions slowly occurring in 2021, conditions for power consumption to recover are now visible, in turn strongly increasing fuel prices. This article will focus on German fossil fuel production as a notable example, having experienced falling price levels during the height of the COVID-19 pandemic in 2020.

The first notable evidence available just from looking at market data is that both spot prices and fuel costs have nearly doubled from where they were before the pandemic. As a result, coal production has reduced by nearly 20% since 2019 - due to both coal exiting the energy system and increased Short Run Marginal Costs (SMRC). Comparatively, natural gas levels for the Q2 periods in 2019 and 2021 have remained almost unchanged despite strongly varying SRMC.

The table below shows the dramatic variation in spot prices and SRMC during the Q2-periods for the last three years. Unsurprisingly, both spot and fuel prices dived during 2020, but with markets recovering this year, price levels have nearly doubled from 2019 across the board. The question posed by this data therefore, is whether or not we can observe changes in the production mix from 2019 to 2021. 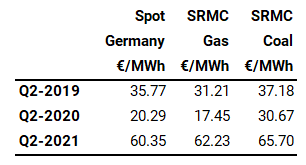 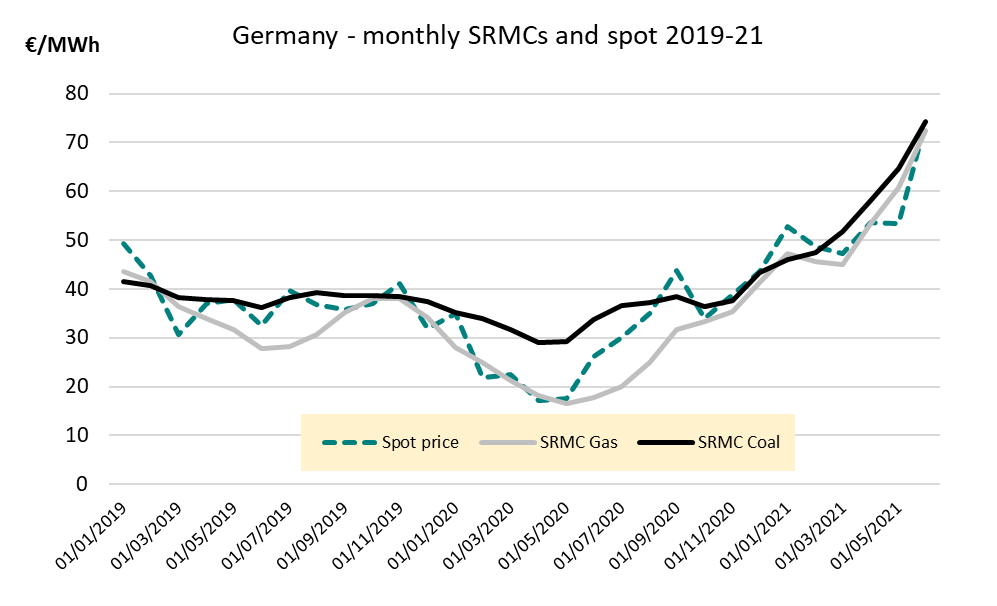 We have collected data for the German Q2-power balances from our own database, mainly based on numbers from the ENTSO-E data source. In the table below, we see that the consumption for 2021 is close to the 2019 level (118 TWh), while the 2020-level came out about 10% lower (-11 TWh). 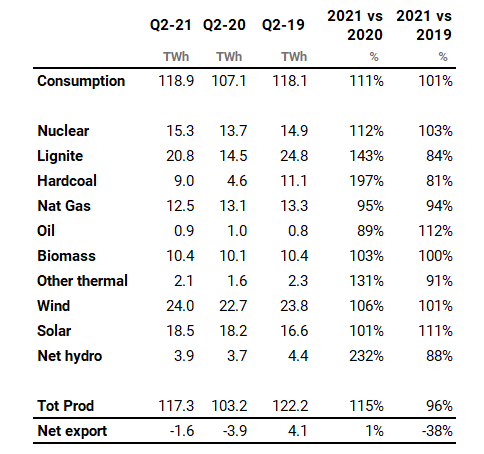 Interestingly, the production numbers from solar and wind generation is nearly unchanged between the years, which means that variations in the consumption is mainly covered from nuclear and the fossil fuel production methods.

It's also notable that the natural gas production is nearly unchanged during these Q2-periods, despite the varying fuel costs, which partly can be explained by the high share of price independent Combined Heat & Power (CHP) production from gas-fired plants.

Furthermore, we see how the coal-fired generation (lignite + hardcoal) dived during Q2-2020 when lower consumption reduced demand for power generation. For Q2-2021, the production from these fuel types have been reduced by nearly 20% compared to 2019 despite very similar overall consumption levels.

The 20% reduction in coal-fired production can partly be explained by the volume of coal exiting the German system, but also due to the simple fact that this generation type is now less competitive in the market because of increased fuel-costs. Significant rises in CO2 costs are another particularly unfavourable factor for the lignite plants.

For 2022, we now expect even lower share of coal-fired volumes in the German fuel mix - as more capacity will be closed down as a part of the German coal-exit plan. EQ will update you during Q3/Q4 about the capacity reductions we will see from New Year 2022.

Below, we have also produced a comparison of the power balance for June-21 vs June-20. From this, we see 12% increased consumption overall, as well as how coal-fired volumes have increased due to this recovery in demand. Conversely, natural gas levels have reduced since last year, which can be explained by the very low gas-fired costs last summer (see price-chart above). 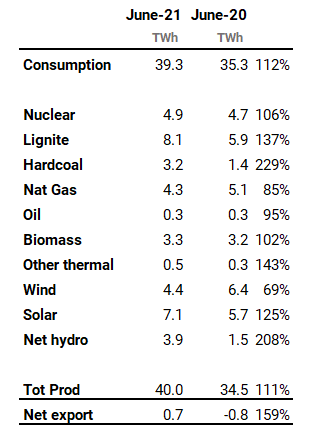 Considering all of these factors, this analysis provides an overview of the power balance and the individual production categories within the German fuel mix, and how they have developed this year in response to both high fuel costs and recovering consumption levels using data from the Energy Quantified time series database.

If you would like to know more about the power balance calculations or even our database, please get in touch using contact@energyquantified.com