Recently, the Nordic power market’s exposure to the current low hydrological balance and very high European power market prices have had a strong influence on power prices. This blog will focus on the situation in Norway South, which accounts for most of the hydrological deficit in the Nordic market.

For Norway-South we currently see the lowest reservoir filling for at least 20 years. We expect Norway South to present historical minimum levels for their hydro reservoir before the melting season start next year, provided that weather follows normal patterns during Q4 and Q1.

As such, the probability for a supply squeeze in April for Norway South is obvious should we see less precipitation than expected. The UK-Norway interconnector coming online from October 1st will increase the level of electricity imported to Norway-South this winter too, meaning that hydro production will be lower than normal. Overall, Norway South is expected to need a net import of about 2000MW on average during January and February.

The Nordic hydro balance is forecasted to be about -27TWh by the end of September (week 38), close to the lowest level seen in the past 20 years. Even with normal precipitation levels during Q4, hydropower production will most likely will reduced as inflows need time to recover back to “normal” levels.

The variation band for accumulated precipitation in Q4 is estimated to be about +/- 20TWh, based on EQ's 40 years of climatic statistics, which means that a dry scenario could see the hydro balance end close to - 50TWh by New Year, nearly 10 TWh lower than seen the past 20 years.

We see from the hydro balance curve below how the level has decreased during the summer. 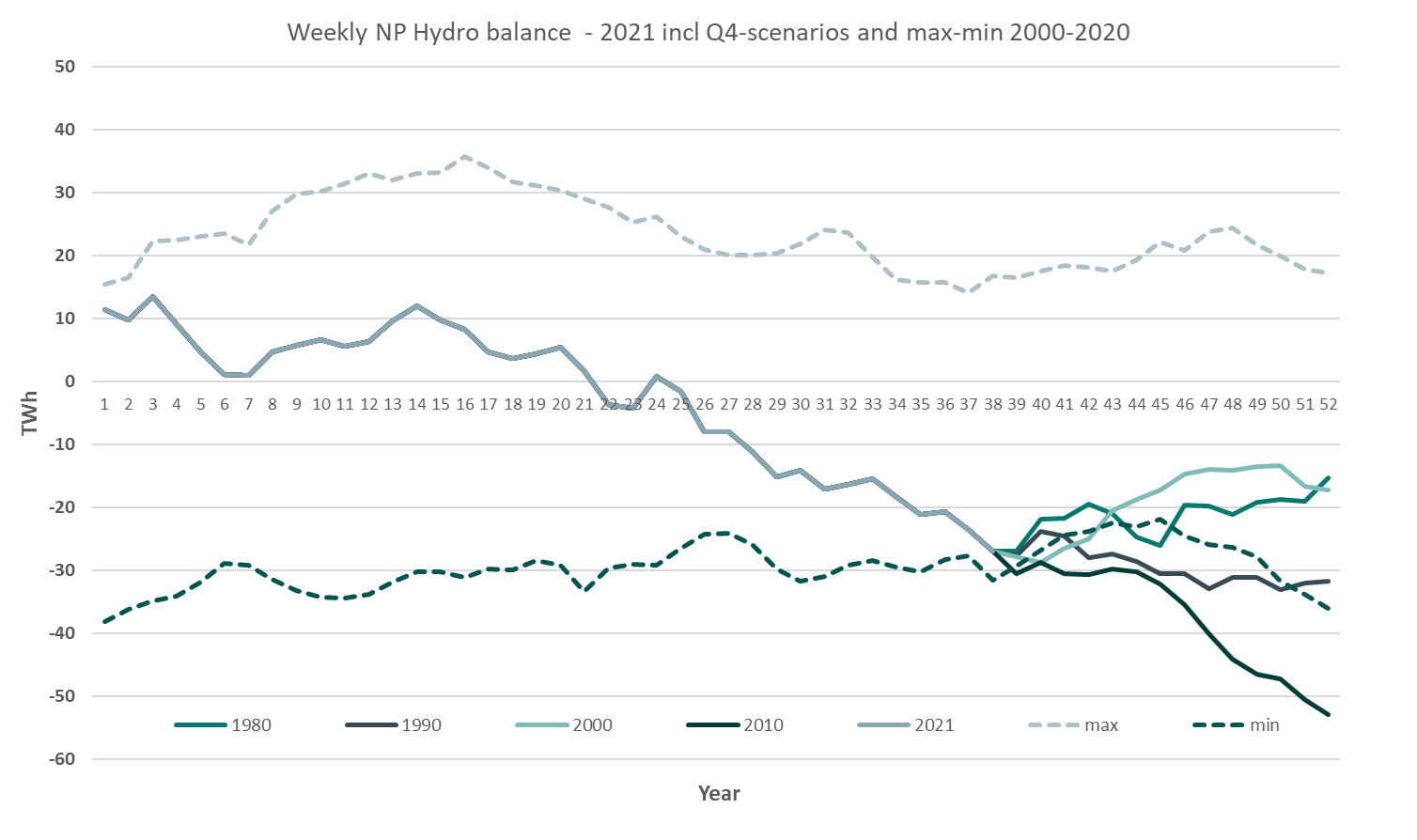 Below, you see a chart of this year’s Norwegian inflow level this compared to the 20-year maximum and minimum. From the start of July, the weekly inflows have been close to the minimum level – and the soil/groundwater level is currently the lowest seen in the past 20 years. In pricezone 5, the riverflows in some areas are also the lowest since 1958, underlining the severity of the situation. 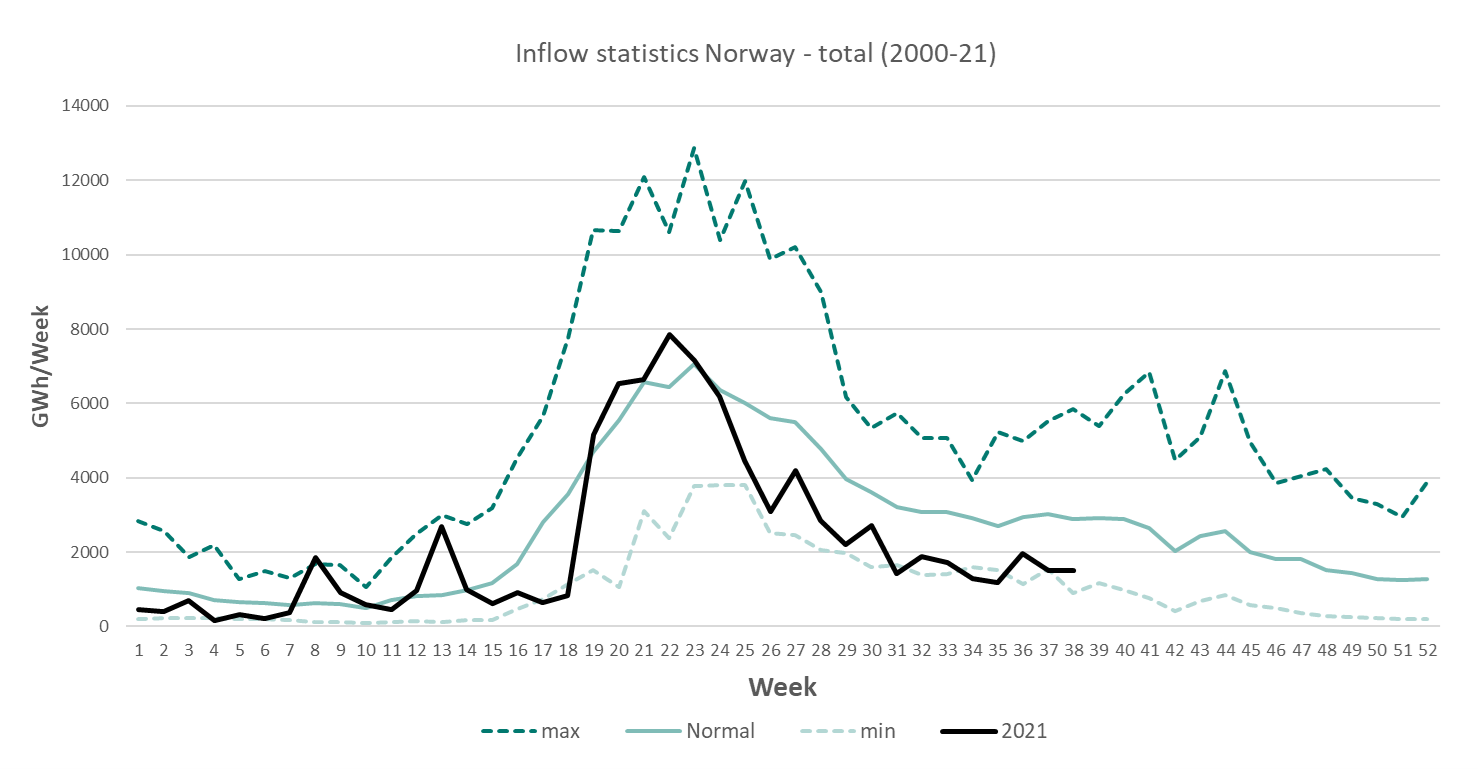 By the end of September, the hydrological balance in Norway South (pricezones 1+2+5) is estimated to be about -19TWh, a significant proportion of the total Nordic deficit of -27TWh the reservoir curve, production and net power exchange for the region.

Inflows are estimated to be about 3TWh lower than normal during Q4, and so we have assumed a reservoir level of about 13% by mid-April.

Based on these restrictions, we have a production profile which results in about 90% of normal production during Q4, and 85% during Q1 (see chart below). For Q4 + Q1. this means about 6TWh lower production than in a normal case. For Q1, the hydropower production will in average be reduced by about 1700MW compared to normal expectations. 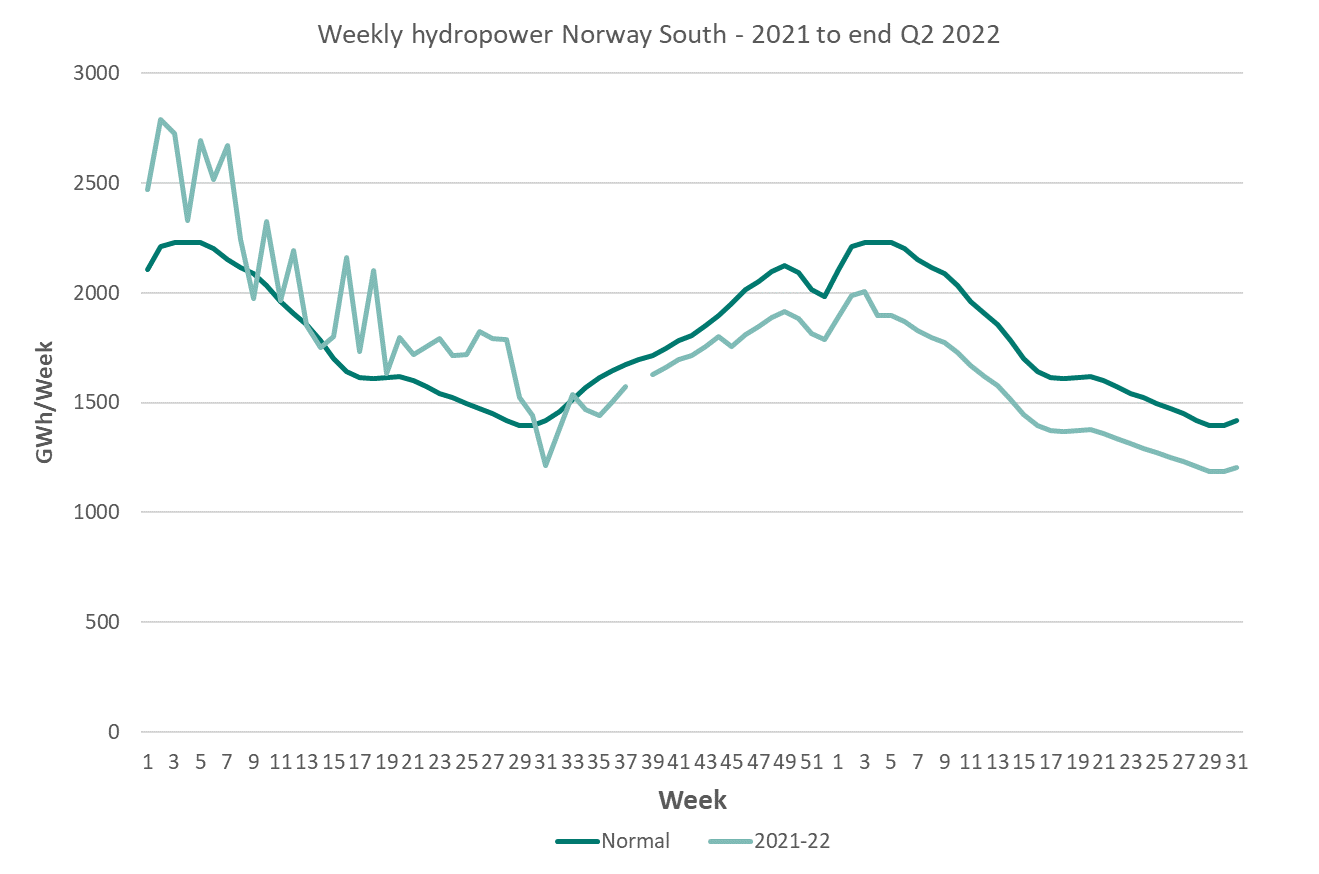 We expect the according reservoir curve (below) to be lower than the 20-years statistics, with the possibility of further reduced production during Q4. 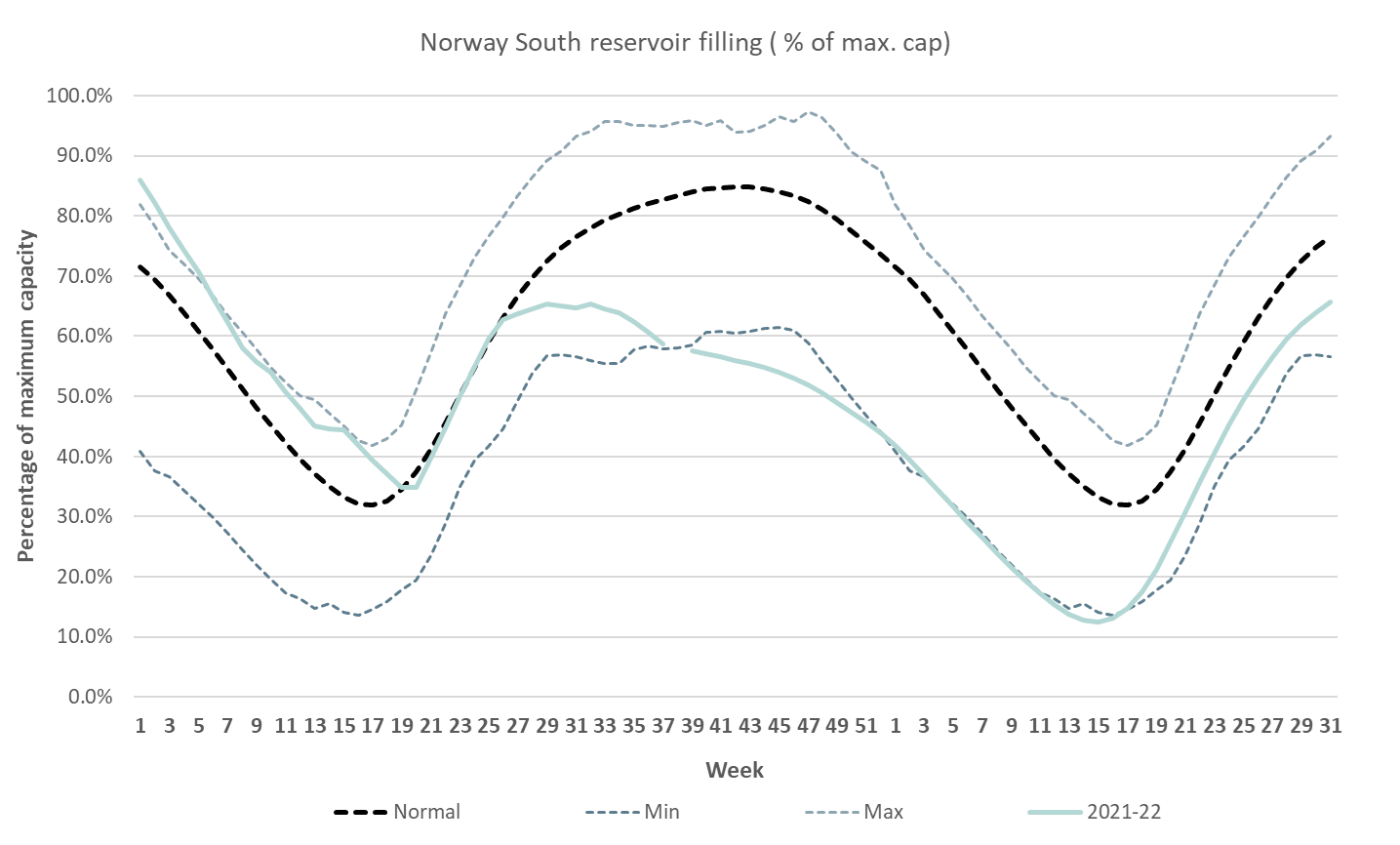 Under normal weather conditions, the net power exchange for the Norway-South (NO1+2+5) will see an import situation prevail during Q1 by as the production is, on average, expected to be about 1700MW (4TWh) lower than normal.

The chart below shows the weekly net weekly export balance until the end of Q2-2022 in normal weather conditions, showing that the max weekly import will be nearly 2000MW. The introduction of the UK cable will mean changes in the net export/import volumes, but if we assume a 1000MW fixed export towards UK from NO2, then 1000 MW more import will be required from the other interconnectors to Norway South - see the light green line below.

An import of about 3000MW on weekly basis on the current connectors will not mean any problems for the power system or the interconnector-capacities. Under the import situation outlined, we would expect Norway South to see price levels similar or higher to the German market - which is currently traded at 145€/MWh for Q1.

The spot price difference between Germany & NO2 is currently around 30€/MWh, but this will most likely vanish, or the Nordic prices could even surpass the German market.

In summary, a combination of extremely strong fuel prices, high Continental power prices, the strong hydrological deficit in Norway South and the prospect of the 1400 MW North Sea Link operating from October 1st introduces an extreme uncertainty for the spot-prices in Norway South during Q1 and Q2.

Further scenario analysis will be made later when we are approaching the Q1-PERIOD.

The presentation is based on the EQ Fundamental database. If you would like to know more about the fundamental calculations or our database, please get touch at contact@energyquantified.com.