Trading energy in a risky world

As the results of climate change continue to affect global markets, our MD Americas, Andrés Cala takes a look at how droughts are playing their part in changing the outlook for hydro power in South America:

This year’s dry rainy season in Brazil is now the worst drought the country has seen in over 90 years. Hydroelectric reservoir levels in Brazil’s central, south-east region, which generates half of the country’s electricity, hover around 30%, with no significant rain expected until September.

The hydrobalance, which measures the available hydroelectric resource in GWh, is the lowest on record (according to Refinitiv data, which started tracking it in 2005).

Just like the vast majority of Latin America, Brazil is heavily reliant on hydroelectric power and - given that the effects of the drought are forecast to continue for the next two months - the country has turned to liquified natural gas (LNG) in order to fill the gap in power production.

Brazil’s year on year LNG imports trebled to 3.9bcm in the first half of 2021. This is not necessarily unique across the continent either, as Chile’s equivalent imports have increased 45% to 2.6bcm, and Argentina’s by 39% (up to 1bcm), according to vessel tracking data supplied by marine valuation and data provider VesselsValue. Lower than expected supply from gas producers Bolivia and Argentina have also contributed to surging LNG imports. 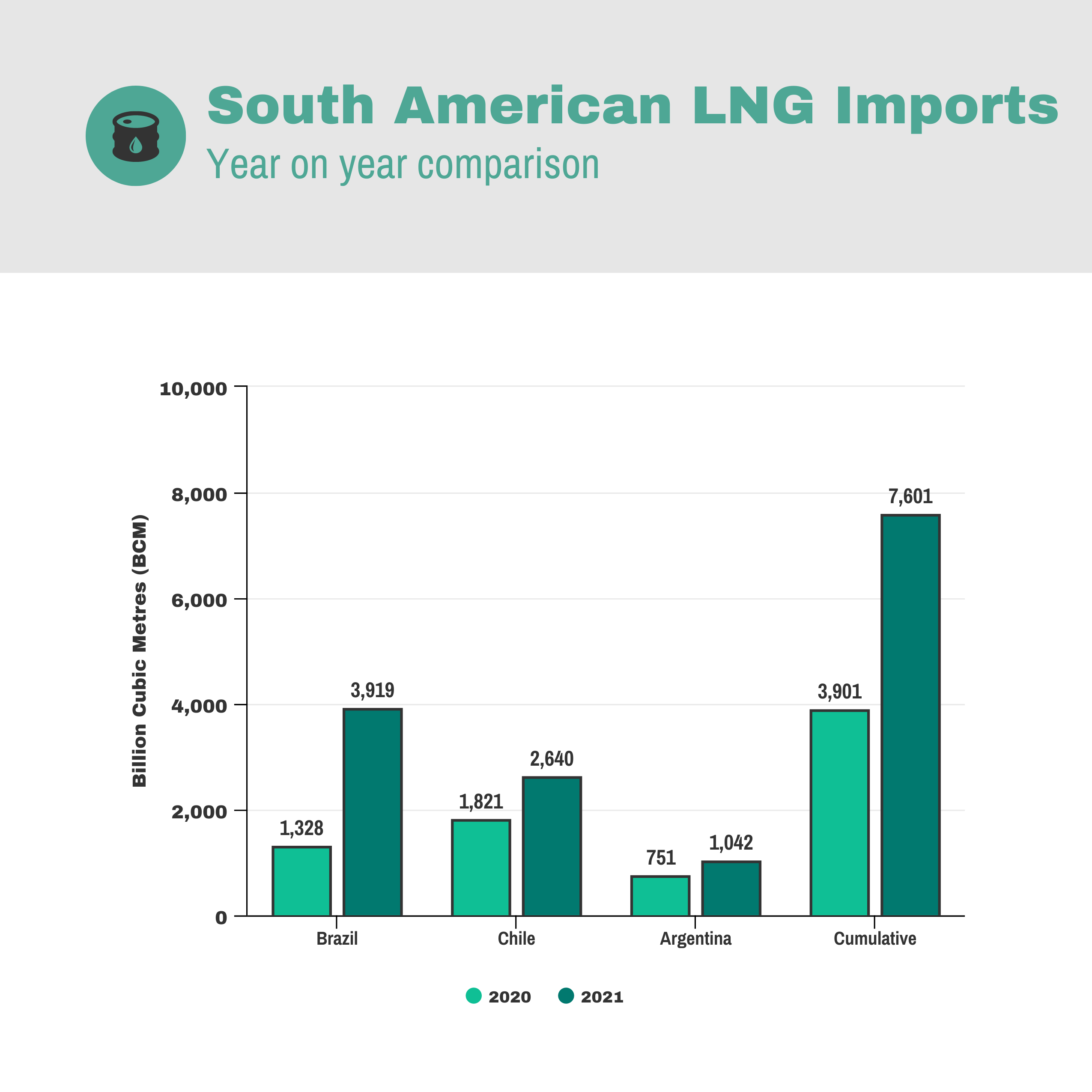 Across the three countries, LNG imports surged 95% year on year in the first half. And with winter coming, we can be sure that gas demand will remain high. Incidentally, Brazil has also just passed a new law that will increase the country’s gas-fired fleet by as much as 2GW, which could result in more LNG imports, but the same could also be said of Mexico, Pakistan, the Philippines, or Vietnam, which are also expanding their fleets of gas-fired plants.

Droughts in South American are nothing new, nor indeed is the resulting surge in LNG imports. Until now, it was nothing more than a news blip, or at best an extra arbitrage window for LNG traders and reloaders.

But this time, the extra demand from South America has coincided with gas-starved gas markets in the northern hemisphere. Europe, for example, has received 17% fewer LNG cargoes in the first half of 2021 than it did last year, as cargoes are predominantly heading towards Asia.

Brazil’s drought has been one of the drivers behind 13-year high European gas prices, which also propelled power and CO2 markets across the continent.

Going forward, reading the signals of such events can be the difference between being caught short in a tight market or selling at premium prices.

Of course, the drought is coupled alongside other global drivers, including ballooning commodity prices underpinned by policy decisions in some wealthy countries; high freight costs; low gas reserve levels; high coal prices, and demand growth as the world claws its way back into recovery mode after the economic impacts of the COVID-19 pandemic.

Market participants are already tracking non-European events, such as attacks on Saudi oil infrastructure or a coal train derailment in Australia. However, as time progresses, a drought in South America or delays to plans to increase gas production in any major LNG exporter can be shown to be impacting European power bills directly.

At the beginning of Spring, just as South America was starting to secure its extra LNG requirements, LNG and TTF prices were trading around nearly half their current levels. After all, gas has slowly matured in recent years to become more like oil and coal, affected by more distant fundamentals.

As energy commodity prices tend to globalize, weighing in far-fetched factors in distant lands will increasingly be required to manage a portfolio.

In that sense, gas markets are just the latest to do so. International renewable energy certificates -the global equivalent to a guarantee of origin- as well as CO2 markets, tend to be globalized as well. The same is expected of hydrogen and power markets in future too.

So whether it’s a drought in Brazil, a strike in South Africa, coal-import quotas in China, a geopolitical move by Russia, a nuclear shutdown in Japan, or a cold-front on the northeastern coast of the US, commodity markets will continue to further intertwine, adding liquidity to distant markets and offering multiple hedging opportunities.

Just as European CO2 prices have attracted hedge funds from distant lands, eventually so will the landing prices of LNG in South Korea, or a reload out of France heading to Chile.

And that, ultimately, will require a global view of things, even if most of the portfolio is managed locally.

Andrés has over two decades of experience in geopolitics and energy. A political scientist by training, he’s spent most of his career writing, both as an analyst and an author. As a journalist, he's been published in outlets such as the New York Times, the Wall Street Journal, and Time Magazine.

To speak to Andres, take a look at our Advisory Services page.